After a discussion, web poll, and call-out to members, some of us gathered in Tacoma today to show support for Idle No More. Soon after, the photo above was posted on Facebook with our statement:

We, the members of Pacific Sámi Searvi (Sámi Americans in the Pacific Northwest) stand together with our Sámi brothers and sisters in solidarity with the Idle No More movement.

Within three hours, the photo was “liked” over 900 times and shared over 200 times. Wow.

Among the Facebook comments was a not-unexpected question: What is a Sami?

“The Sámi are the Indigenous people of northern Norway, Sweden, Finland and the Kola Peninsula of Russia, sometimes referred to as ‘Lapps’ or ‘Laplanders.’ There are 9 Sámi languages. Although reindeer herding is the most well-known Sámi livelihood, fishing, hunting and small-scale farming and sheep-raising are also traditional ways of life. Sámi participated in the co-founding of the World Council of Indigenous Peoples in the 1970s, and participate in a number of global Indigenous forums and organizations today.”

Indigenous and non-indigenous people around the world are uniting to support the goals of Idle No More. The Sámi Parliament issued a statement of support on January 11th, as reported here earlier, joining a river of other voices. Why the surge of international support?

As environmentalist Bill McKibben says, after the hottest year on record, “the stakes couldn’t be higher, for Canada and for the world.” (Alberta’s tar sands and oil in the Arctic are two of the “world’s biggest dirty energy projects,” according to Greenpeace, and threaten to push global climate change past “the point of no return.”)

Indigenous people not only have a huge personal stake in the outcome but are uniquely capable of action:

“Corporations and governments have often discounted the power of native communities—because they were poor and scattered in distant places, they could be ignored or bought off. But in fact their lands contain much of the continent’s hydrocarbon wealth—and, happily, much of its wind, solar and geo-thermal resources, as well. The choices that Native people make over the next few years will be crucial to the planet’s future—and Idle No More is an awfully good sign that the people who have spent the longest in this place are now rising artfully and forcefully to its defense.”

With alarming losses to Arctic Sea ice (the scantest ice cap in recorded history), the Sámi are not only vulnerable to global warming (even as oil companies anticipate increased exploration), but uniquely poised to address it.

“There is a lot to learn from the Sámi, they have the traditional ecological knowledge, they really know about nature,” said Helander-Renvall, head of the Arctic Indigenous Peoples Office at the University of Lapland in Rovaniemi. “They have the most precise knowledge about the weather conditions, about the plants, the diet, the resources. The Sami people have an ethical relationship with nature; a respect for nature that also has a spiritual side.”

The Arctic region is uniquely vulnerable to global warming, but if it is to weather the storm, it would do well to adopt Sami methods of land and resource management, communal co-operation and communication, local knowledge and best practice, she said.

Monday, January 28, is the World Wide Day of Action for Idle No More. Find out what is happening here. 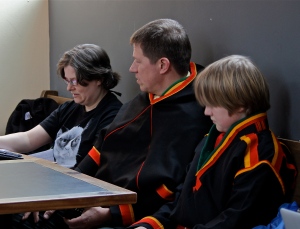 Even Grumpy Cat is in solidarity, as seen here on Sara, chatting with Troy and Espen