Update: The exhibit will now travel to the Swedish-American Museum in Chicago, opening in January, 2014.

As luck would have it, I didn’t make it to see Dressing Swedish: From to Hazelius to Salander, the traveling exhibition from the Swedish Embassy in DC, until the final day (final hour, even) of its stay in Seattle. Which is too bad, as it was more interesting and diverse than I expected, and thoughtfully presented. Kudos to the curators, Dr. Charlotte Hylten-Cavallius and Lizette Graden of the Nordic Heritage Museum, and to the Multicultural Society of Tumba, Sweden, which supported the project.

Included among the many gorgeous Swedish folk costumes was one with a “Muslim” headscarf and several Sami items, including a child’s gakti from Karesuando and a modern outfit from Stoorstalka (“design by Samis for Sami people, and equally cool souls”).

It is interesting to muse on the fact that, while many cultures (in warm climates) have gone without clothing, none have gone without decoration. Tattoos and body piercings are older than the loom, and jewelry is universal. It is fascinating to explore the history of artistic expression in clothing.

In curious contrast to the intricate embroidery and colors in the exhibit, my own inherited Swedish-Sami subculture of Laestadianism is ascetic, shunning self-adornment and art itself. Its founder Lars Levi Laestadius, a botanist turned priest and then revivalist, encouraged his followers to dress modestly, and over time, this was codified into nuanced prohibitions on jewelry, neckties, cosmetics, open-toed shoes, and even the color red. In some Laestadian circles, women and girls still wear head scarves. Many clues to the class, marital status, and personality of the individual are telegraphed through clothing choices.

Torjer Olsen, research fellow in History of Religion at the University of Tromsø suggests that the use of clothes as symbols may be particularly important for groups like the Laestadian communities, where it is difficult for women to communicate verbally because they are considered to be subordinate and not allowed to speak in public.

The skirt remains a gender specific garment heavy with symbolism. Olsen claims that the girls’ skirts, especially short ones, are a play with symbols. With skirts they can both dress “in” (as part of the congregation) and “out” (in line with the majority society). This way the girls communicate both their loyalty to and distance from the congregation.”

I mused on this as I admired the Stoorstalka “party skirt” (top photo), which borrows from tradional Sami gakti, but being made of synthetic fabric instead of wool or silk, is washable and less expensive. Being neither too short nor too long, I can imagine a trendy Laestadian wearing it (and a rebellious one rolling up the waistband to make it shorter). There is a ruffle of tulle peeking out underneath, though. That could get a girl in trouble with the standards enforcers. 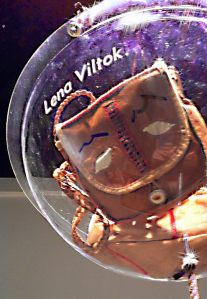 Some of the displays came with artist statements.

Fia Kaddik, Photographer and craftswoman, Jokkmokk.
This bag symbolizes the threat to our mountain areas . . . the red ribbon in the middle represents Mother Earth, who is beginning to burn herself out as a result of all the mining that is taking place in our mountain areas.

Lena Viltok, Craftswoman and designer, Jokkmokk
In addition to being decorative, the silver also reflects Sami folklore about silver protecting against evil. In the olden days, the evil could be Stallu (the Giant) or other evil forces that wanted to destroy the Sami. Today the evil forces are all the exploitative developments that reduce the reindeer pasturelands and make it increasingly impossible for us to live our lives. This is happening to me now with the mineral prospecting that is taking place in the area where the reindeer graze and breed, and where our son must find his future livelihood. But we struggle on and hope that the silver will protect us. This is why I have called the bag “lellet” (to live).

Way to represent, Fia and Lena. I found myself wanting to touch your duodji in solidarity, but it was suspended in a bowl above grasping hands. Probably a good thing.

In the next room was a display case with three pairs of Denim Demon jeans, all painstakingly preweathered (you can even see the round imprint from a can of snus). A placard announced: ” . . .as our clothing is designed with the Sami in mind, it needs to be durable and hard-wearing to withstand the rigors of reindeer herding and living in harsh conditions. We gave seven pairs of jeans to seven Sami who wore them for six months without washing them.”

Voi, voi. I’m assuming they were bachelors. I have mixed feelings about this kind of marketing, and would love to be persuaded that the owners are not exploiting the Sami in the same way Ralph Lauren exploits Native Americans. (Update: the owners are Sami and the jeans are made in China.)

In elegant contrast to smelly jeans were the felted wool birch coats designed by Minnesotan Lauri Jacobi. I admire her work and would happily wear one of her coats if they weren’t so expensive. An American of northern Swedish ancestry, Jacobi’s are beautiful, made of natural materials, and useful, which incidentally are three of the requirements for authentic duodji (Sami handicrafts). I couldn’t resist purchasing a pair of “pine needle blanket” fleece mittens in gakti-inspired colors. (The gift shop clerk asked if they were oven mitts!) They will remind each time I wear them of my mixed and colorful heritage. Maybe I’ll knit a cable to attach them, as my mother did for our mittens as kids, for threading through our cloat sleeves.

In the final room was a hybrid costume from David Norman, whose grandfather was from Dalarna, Sweden. His statement explains that he worked in a Native American community in Tacoma, and his students made his regalia so he could dance at powwows, an incredible honor that moved him to reciprocate (an example of the respectful exchange encouraged in this essay).

“In the Native culture it is proper and encouraged to add your own story to the Native regalia. Weaving together two

cultures has been a way to honor both and add a Swedish touch to my Native dress. It creates opportunity for me to relate my own story to the Native culture in which I now participate.”

I liked Mr. Norman’s story and regalia, but found it curious that the tribe (the Puyallup?), was not named, an omission that does not seem to honor Native custom, but perhaps there are reasons not obvious to me.

A Facebook friend recently posted photos of her mother’s wedding and her own, in which they are both wearing a Swedish wedding crown that has been handed down for generations. I find that lovely.

Sadly, for so many of us, the items that carried our ancestors’ cultures have disappeared. It is up to each of us to reclaim and refashion what we can. Many thanks to Kai Turi for the translation of this Norwegian documentary episode. Watch and read along.

“Here live the Sami. We are alive and kicking!”

But it has taken many years to get here. The Sami are connected with the somewhat murky, ugly and shameful. Sami children were sent to boarding schools to be Norwegian.

Boarding schools were in many ways child abuse in the public sector.

Sami people have waged a silent battle, but not without resistance.

“It was pretty awful to find out maybe we were Sami, we just had negative opinions about the Sami when we were growing up. It was not a nice thing. I was embarrassed and did not want to know. I wish that I had received this information earlier. It took a long time before I dared to figure this out.”

Susann grew up here in Manndalen in a regular, Norwegian family. But one day she got a lesson at school that would change her life.

“All students in the class wrote down the name of the farmstead they came from. Then we saw that 90% of all the names we had written, were Sami…Up there you Ordamielli. Over there you have Rouhtu. Down there you have Ribet, Suddasluohka, Gáiskeriidi…Most places in the village had a Sami name. And it had to mean something. I was curious and began to find out more.”