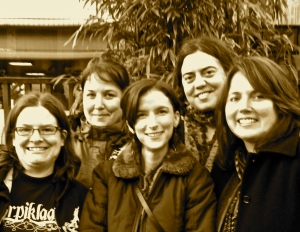 Meeting up at “Suddenly Sámi” movie

Hello, people! While up-to-the-minute event information is best found on the Pacific Sami Searvi Facebook page, this will be a resource for articles, photos, and other items that merit a longer shelf-life.

Let me start with a brief outline of the searvi’s genesis. In the beginning was…the Seattle International Film Festival. Specifically a showing of the film “Suddenly Sámi.” A few of us who had been chatting on Facebook decided to go analog and (gasp) meet each other. We saw the film, which was terrific, went out to lunch afterward, and decided we had (1) enjoyed each other adequately, and (2) could stand to repeat the whole thing.

Thus was born the group.

On subsequent meetings, we talked about naming ourselves. Lynn and Renee met up with Ilmari and Kent in Portland, and came back calling it the Odd Squad. Lynn offered other amusing options that were, for some reason, abandoned. I suggested Pacific Siida as it would cover anyone within shouting distance of the ocean, with the nice touch of pacific meaning “peaceful.”

Next up: gunshots at one of our outings! 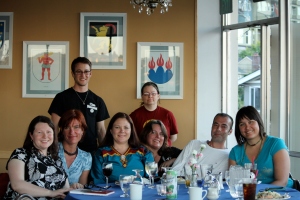 Reading material at the pancake breakfast