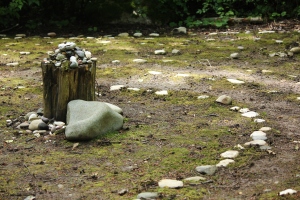 I’m taking a fascinating free, online class through the University of Toronto called Aboriginal Worldviews and Education. One of our first assignments was to write about a “meaningful place.” It was hard to settle on one, as there are so many within shouting distance, but I decided to write about a remote stone labyrinth where (in which?) I have walked in contemplation and more recently, in grief. The labyrinth is located on an island north of Seattle, a place that I came to know through two friends who lived there, a married couple who became, over the years, like surrogate parents (he shared my Finnish and Sámi heritage, she my passion for books and lost causes). Last year they passed away within a few months of each other, and were buried in the cemetery near the labyrinth, behind a storybook white-steepled church.

When I visit, I park my bike near the church and walk through the woods to the labyrinth under a canopy of Douglas fir and maple trees.  In the distance there is the sound of the surf, and rain or shine, you can smell the salty air. It’s a beautiful place.

The tradition I learned on the island was to bring a pebble to leave in the middle of the labyrinth. For the bereaved, or at least for me, this is a helpful ritual of laying down one’s burden of grief before returning to the everyday.

Unlike a maze, the circles of a labyrinth contain only one path, with no dead ends. The way in is the way out, and the simple act of concentrating on your next step is calming. I prefer to walk alone, although walking with others requires you to synchronize your pace, so that no one is lingering or rushing, and that too is meditative.

You may be familiar with indoor labyrinths, like those at St. Mark’s in Seattle and Grace Cathedral in San Francisco, both of which are magical by candlelight. Perhaps the most famous example is at Chartres in northern France, where in medieval times the clergy were said to dance at Eastertime. It is only recently that this ancient pre-Christian symbol was rediscovered by churches as a spiritual tool.

The history of labyrinths encompasses sseveral continents and cultures as various as the Hopi and the Hindi. There are extant examples all over the world, including several in Sápmi.  University of Tromsø archeologist Bjørnar Olsen, in a Caerdroia article, describes six stone labyrinths on the coast of Finnmark and over 20 on the Kola Peninsula, all on or near ancient Sámi burial grounds, and estimated to have been constructed during the period 1200-1700 CE. (See more details and photos of two in Sør-Varange, Norway.)

Those seaside labyrinths may have served a pragmatic purpose, says Coerdroia‘s Jeff Saward:

However, in his fascinating essay, Olsen theorizes that the labyrinth served a much deeper purpose: it was a physical metaphor of the spiritual transition from life into death. Noaidi may have used the path during burial rituals, and the Sámi people may have considered the labyrinth a potent counter-symbols to the church during an intense and often painful period of Christianization.

The surrounding Scandinavian and Russian societies were competing over the resources in the Saami area, and tried to gain political control over it. This rapidly increasing contact with the outside world clearly represented a serious threat to basic social and cultural values in the Saami hunting societies, and it is likely to have generated a considerable stress within them. In such a context one might expect that the local societies mobilised a counter-active symbolic and ritual production in an attempt to reinforce key cultural values, and to communicate internal solidarity.

Of course my “meaningful place” was special to people long before there was a stone labyrinth (installed by the local parishioners), long before there was a church, or a cemetery, or any residents at all. While they did not establish villages on the island, the local Samish tribe came by canoe from the mainland to hunt, fish, and forage, and—no doubt—to look out at the beautiful views and contemplate their lives and their loved ones.

Do their descendants now visit the labyrinth? Do they attend the church? Do they consider one to be a “counter-symbol” of the other?

I don’t know. But I’ll have a lot to think about the next time I visit.

You can find a labyrinth near you with this World-Wide Labyrinth Locator. Let me know what you discover!

6 thoughts on “No Dead Ends: Labyrinths in Sápmi & Elsewhere”